Home » Kerala Festivals » You are reading » 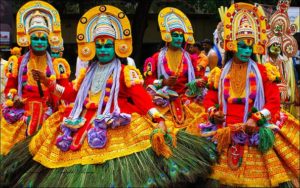 Kerala, God’s own country is noted for its communal concord, rich culture and heritage. The diverse culture of the state has resulted in a colorful mishmash of festivals and fairs. The festivities that continue throughout the year make Kerala more vivacious than any other tourist destination around the world. The spirit of gaiety and jubilation always pervades the ambience of Kerala. Thus Kerala is also known as the land of fairs and festivities. The major religions of Kerala are Hinduism, Islam and Christianity. However there is a minority population which belongs to Jainism, Buddhism and Judaism. While on my tour to Kerala, I was very delighted to know more on the Kerala Festivals and the rituals behind them.

Onam – the Hindu festival is considered as the state festival of Kerala. This biggest festival falls during Aug – Sep and marks the homecoming of legendary King Mahabali. The celebration of Onam lasts for over ten days which brings out the best of Kerala culture and tradition. Ambrosial Onasadya, intricately decorated Pookalam, breathtaking Snake Boat Race and exotic Kaikottikali dance are some of the most remarkable features of Onam. It is called as the harvest festival in Kerala. 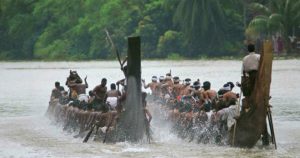 Thrissur Pooram – The most spectacular festival of Kerala is aptly called Pooram of all Poorams where Pooram means ‘the meeting point of all the arts’. The 36 hours festival combines the rich art and culture of Kerala. This festival is celebrated in the asterism Pooram. Pooram was first introduced by the erstwhile Maharaja of Kochi, Rama Varma. The entire celebrations are held at Thekkinkadu ground encircling the Vadakunnathan temple. Large number of spectators and devotees assemble in this ground to witness the meeting of deities of ten different temples.

Thiruvathira – is a religious festival of Kerala celebrated in the fifth month of Malayalam calendar Thiruvathira is essentially the festival for women. Ladies worship Lord Shiva and pray for conjugal harmony and marital bliss on this day. Thiruvathirakkali dance is the other very interesting facet of the festival enchantingly performed by women on this day.

Nehru Trophy Boat Race – The race is held from the Punnamada Lake and special pavilions are set up for the audience to watch this race. This boat race was first inaugurated by Pandit Jawaharlal Nehru in 1952; hence it got its name. Separate boat races are conducted for the women participants.