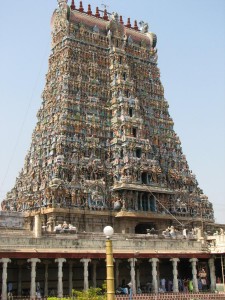 “Architecture is a continuing dialogue between generations which creates an environment across time” is a quote by Vincent Scully which sits smug on the culturally rich city, Madurai. Among the temples that I have visited in South India, the Sri Meenakshi temple of Madurai has the most intense and striking atmosphere. It is probably one of the most interesting, exotic and fascinating temples of India, known for its outstanding and impressive architectural beauty.

The enormous temple complex is dedicated to Lord Shiva, known as Sundareshvara and his consort Parvati or Meenakshi that’s why it is called as Meenakshi Sundareswarar Temple or Meenakshi Amman Temple. It is known for its supreme architectural wonder showcasing the affluent Dravidian Culture. The temple is built in the lotus shaped city Madurai and the outer towers of the temple are the landmarks of this city. The temple is constructed within a high-walled enclosure, at the centre there are two sanctums, one for Meenakshi and the other for Sundareshwara. It is surrounded by a number of smaller shrines, grand pillared halls and twelve impressive gopurams. There are soaring towers in the temple which are decorated with stucco figures of deities, mythical animals and monsters painted in vivid colours.

The elaborate layout of the temple overwhelmed me. There are many things in the temple that captivated my attention. some of them are the 14 magnificent Gopurams or towers including two golden Gopurams for the main deities that are elaborately sculptured and painted. The average height of these towers are between 45 to 50 meters. The towers are majestically adorned with the stone carvings of Hindu gods and goddesses, painted in brilliant colours.

Ashta Shakthi Mandapam which is located on the eastern entrance of the temple is truly beautiful. This hall derived its name from the eight statues of goddesses that are installed inside. Adjacent to this is the Meenakshi Nayak Mandapam, known for its sculptures on the pillars that portray the story of Lord Shiva’s Thiruvilayadals (miracles) and Meenakshi’s birth. This hall also has a lamp-holder with 1,008 lamps which are lit up during the festive occasions.

Orthamarai Kulam (Golden Lotus Tank) is a scared lake which is located inside the temple premises. On the western side of the lake are the Oonjal (swing) Mandapam and Killikoontu (parrot cage) Mandapam. On every Friday the idols of Meenakshi and Sundareswarar are placed on the swing in the Oonjal Mandapam and mantras are chanted. Lord Sundareswarar’s shrine is situated to the north of Kilikoontu Mandapam. Here Sundareswarar is worshipped in the form of a linga along with his 64 bhootaganas, 32 lions and 8 elephants attendants.

Meenakshi Sundareswarar Temple celebrates at least one festival every month but the most important festival is the Chithirai Brahamostavam Festival or Meenakshi Thirukalyanam (The divine marriage of Goddess Meenakshi and Lord Sundareswarar) which is celebrated in the month of April every year.

After visiting this magnificent temple I realised that this place is also the storehouse of Dravidian knowledge and culture. Inscriptions, sculptures, paintings and architectures are delicately interwoven with religious fervour which glorifies this historical marvel throughout the world and provides it an eminent place in India. 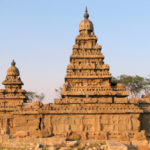 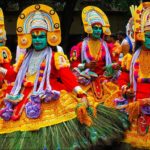 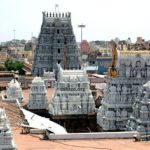 Chennai the City of Grace and Peace

«Next Post Stop Dreaming And Start Cruising At Kerala Backwaters For A Dream-like Experience
Kathakali Dance, Kerala: A Kaleidoscope of Emotions Previous Post»